Long straw thatch is easily recognisable.  It has long lengths of straw visible on the surface and gives the general appearance of having been “poured on” in contrast to the closely cropped look of combed wheat reed and water reed thatch.  Long straw also has exterior hazel rodding at eaves and gables, a feature seldom seen on the reed types.  It is more easily attacked by birds but netting in good order should overcome this completely.  Long straw requires more preparation on the ground before applying.  Many roofs, thatched in long straw, are known to have lasted at least 25 years,( up to 50 years).

In most instances, rethatching in long straw will not involve complete removal of all the old thatch.  It is normal practice to fasten long straw to the existing coat of thatch.  This is a perfectly satisfactory means, and indeed a traditional way, of rethatching.  The existing thatch is stripped back to a sound base; all loose areas and decayed material should be retightened and replaced as necessary.

Historical factors need to be taken into account for East Anglia when considering a definition for long straw thatch. The region has been the bread bowl of the UK for centuries with a lot of straw being produced as a bi-product; this may explain why the region, to this day, has kept its long tradition of long straw thatch.

There is very good evidence, certainly within the last 150 years, that it would be normal to expect that all Long Straw thatch would have a mix of heads and butt ends showing on the surface of a freshly thatched roof. Censuses from the 1800’s show that due to the population boom and the golden age of agriculture the number of thatched properties increased by 42%, the vast bulk of these being straw roofs. Unfortunately, 96% of these properties have since been lost. (Information taken from the ‘History of thatch’ within the EH guidance note for Thatch and thatching)

Quality of the material

The Association recognises only good quality long straw grown especially for the purpose of thatching.  The guidelines for assessing quality are as follows:

Long straw should be preferably hollow stemmed, winter grown wheat, although rye straw and its rye/wheat derivatives, such as Triticale are recognised. Rye straw should be noted as a less durable material, to some degree, due to the cell structure of its species.
There is no wheat variety, suitable for thatching, on the current NIAB seed list. Old seed must be retained and currently the main varieties in use are Maris Widgeon, Maris Huntsman, Aquilla, Square Heads Master and Masterpiece.

Where artificial fertiliser is employed, the Nitrogen level should be kept as low as possible, normally in the region of 50 units/acre for the modern approved varieties of wheat. For the older varieties of wheat that predate artificial fertilisers introduction, it is strongly advisable to keep the nitrogen levels down to below 30 units/acre, best applied as a balanced grassland fertiliser of NPK.

Crops are cut, traditionally, with a binder, when the nodes are still green and the grain is of a cheesy texture, this ensures that the straw is frozen in its prime, thus preserving it’s strength. The grain moisture content at this point is about 30%. The sheaves are then stood up, ‘stooked’, in the field to slowly dry and condition the straw in it’s prime condition, and to ripen the grain in the heads. This normally takes 2 – 3 weeks.
The straw should have an average cut length of at least 30 inches.

Whichever method of threshing is employed, it should leave the straw stems only slightly bruised, and not unduly damaged or crushed, avoiding the breaking of stems, with a certain amount of flag (dried leaf) mixed in with the stems. The straw should not be discoloured to any degree. It should be strong and supple and able to resist or even defy efforts to break it by twisting a handful continuously.

Long straw type material is composed from uncombed material, which is dampened and shaken onto a bed system.

It would be normal for a traditionally prepared bed to be thoroughly mixed, with no lumps of straw aligned the same way, in order to ensure that a reasonable mix of heads and butts can be pulled from the bed, when yealming.

A bed of straw should be of a reasonable size, or weighted, to help with a clean pull. Good double handfuls are then pulled out and laid side by side, to form a line of straw. Once a line has been made, bunches are worked tightly together, cleaned of waste and straightened to form yealms.

Yealms resemble straw tiles, approximately 18” to 24” wide and normally 4-5 inches in depth, but can be increased up to 7-8 inches. Yealms can be made tapered with a pronounced bigger end, for big end down thatching, or a more parallel yealm, suitable for big end up thatching.

3       Traditional application/ thatching to the roof

It would be normal to place the yealms into position, with a certain amount of sliding before fixing, without dressing into position. The ‘softened’ nature of this material, due to it’s preparation process, is important in allowing the material to ‘lie’ on the roof, without the need for dressing.

It would be normal to expect to aim for an even mix of heads and butts showing on the surface of a freshly thatched roof, with an allowance of 10-15% dominance, of either heads or butts showing, being accepted as normal. 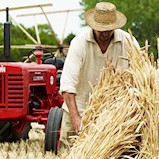 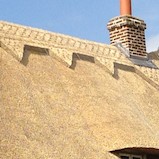 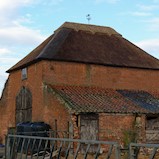 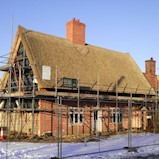 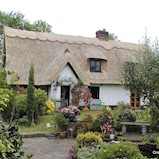 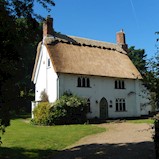 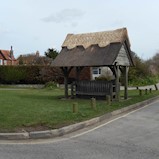 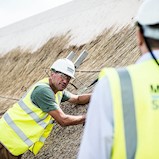 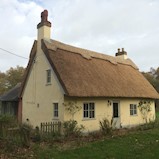